Recent revelations by a former Facebook data analyst are bringing to light what some users say they have felt for years as users of the tech giant’s platforms, which include Instagram.

Whistleblower Frances Haugen leaked one Facebook study stating that 13.5 percent of U.K. teen girls in one survey said due to social media use, their suicidal thoughts became more frequent.

In a finding first reported in the Wall Street Journal, Facebook researchers found that approximately 32% of teen girls said that when they felt poorly about their bodies, Instagram made them feel worse.

Facebook CEO Mark Zuckerberg asserted that Haugen’s comments and data provided were taken out of context. He said that “it’s very important to me that everything we build is safe and good for kids.”

For two Western Michigan University sophomores, Alison Laney and Shelby Wilmot, the impact of social media on their beauty regimes and self-esteem around appearance is indisputable, they say.

Dr. Kristine Gibson of WMU Homer Stryker School of Medicine specializes in eating disorders in young adults. She emphasizes the need for support and intervention to educate teens about healthy eating and positive body image. 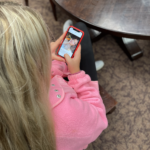 WMU sophomore Alison Laney looks at the trending beauty standards for young women through a picture of Kylie Jenner on Instagram. Jenner, a popular media personality, is also a socialite, model, and businesswomen. “It is hard to keep up with the certain beauty standards on social media.” 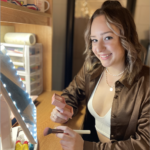 WMU sophomore Shelby Wilmot enjoys putting on makeup in order to feel more confident about her physical appearance. Shelby puts on makeup to keep up with certain beauty standards on social media. “I see a variety of makeup looks and styling ideas on social media.” 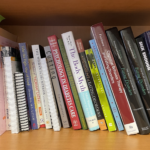 A pediatric and eating disorders specialist in young adults, Dr. Kristine Gibson, showcases a variety of different materials on her bookshelf to help her better understand the different aspects of eating disorders. 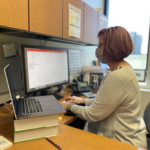 Pediatrician Kristine Gibson creates a list of resources for anyone unaware of eating disorders so they can better understand why their loved one has developed an eating disorder. “We offer resources such as a medical and adolescent specialist, a social worker, counselors, and a dietitian,” Christian says.