Students at Western Michigan University’s main campus are waiting another 18 months on top of the three years of construction already completed due to a structural integrity problem with the beams on the new student center.

The student center, which resides in the south side of campus within the new Hilltop Village, will have eight micro-restaurants, an art gallery showcasing students’ work, a dozen meeting rooms, a Starbucks and an on-campus bar.

WMU officials had to delay the student center’s opening until Spring 2023 due to structural problems with the internal beams that were discovered when the building did not pass a vibrations check. Construction crews were sent home on May 4, 2022 after an investigation into the vibrations check deemed it unsafe to work and returned a few days later to repair it, according to mlive.com. The result so far is disappointment, closed shops and offices in the current student center, and detours around the construction site on campus.

The company overseeing construction, Cannon Designs, will assist WMU with the new $99 million student center, located next to the Waldo library and across from Sangren Hall. The University broke ground for the building back in September of 2019 expecting it to be done by fall of 2022. Western Michigan University experienced a 26% increase in enrollment this fall according to local news outlet WWMT, and the promise of a new student center was a natural angle for recruitment. Students were excited about this addition to campus, and many said they were disappointed to arrive to campus this fall to see metal fencing still surrounding the new building. 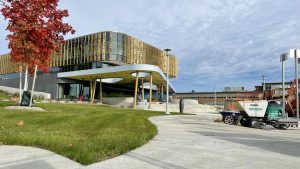 Trucks, generators, and bobcats fill the parking lot as construction continues on the new student center. Hannah Babinski, in her seventh year at WMU, says she is “upset because this was supposed to have happened already and it keeps getting pushed back. So, anticipation.” The opening has been postponed until spring 2023. 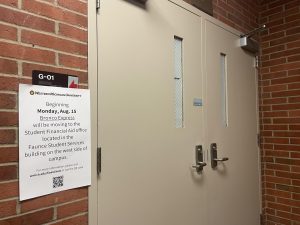 Dark windows and a lower level filled with signs direct students to offices once located within the student center. Student Hannah Babinski says she is “looking forward to actually having a Starbucks on campus but also a bar on campus and a place to get drinks.” 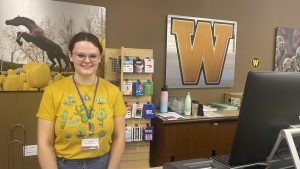 Inside the current student center is the University Bookstore where students purchase books, supplies, technology and apparel. Student and employee Hannah Babinski, 24, says the store will move as soon as possible, but “we won’t move if it’s in-between semesters.” She says she is already guaranteed a job at the new bookstore. She will help move the inventory when the new building opens. 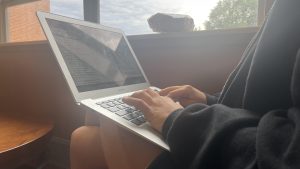 The current student center acts as an easy  place for meeting, studying, or grabbing something to eat. The new student center features eight different restaurants, a Starbucks and various meetings rooms that double as a social meeting place for students. 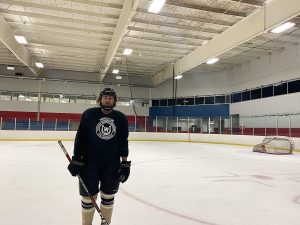 Billy Lukwinski 22, plays on the Stallions Club Hockey Team and is currently in his fifth year at WMU and is a first-year graduate student. Lukwinski says he was looking forward to using “the new campus bar” and is “kind’ve upset because it was going to give us more things to do on campus.” 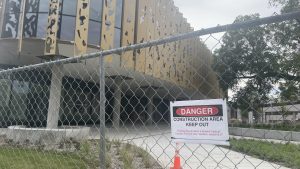 Fencing surrounding the ongoing construction of WMU’s new student center keeps students out as problems with the internal beams delayed its opening this fall, according to MLive. First-year student Brayden Flanders, 18, says he was “severely disappointed” when hearing about the delay as it was “a little bit” of a driving force in him attending Western Michigan this fall. 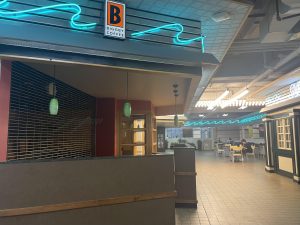 Located in the lower level of the current student center is a permanently-closed Biggby Coffee. 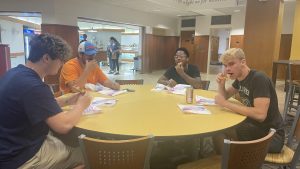 Students use the current student center as a hangout spot and somewhere to eat. First-year student Jack Lumsden says, “This is my second time coming but I think I’m going to come as much as possible because it’s very short distance and the pizzas better.”